October 12, 1952 – Three Koa outrigger canoes launch through the surf at Kawakiu Bay on Molokai’s west side. Powered by six paddlers, each of the canoes is bound for Oahu across 38+ miles of open ocean in the Ka’iwi Channel. Eight hours and 55 minutes later, the Molokai canoe, Kukui O Lanikaula landed on the beach at Waikiki in front of the Moana Hotel. Thus began the world’s most prestigious outrigger canoe race, the Molokai Hoe. 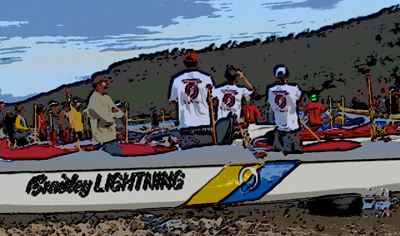 Since then more than 260 canoe clubs have participated in this annual test of strength, endurance and teamwork. Crews from all over the world have come to Hawaii to compete in this rugged event. U.S. crews from California, Oregon, New York, Pennsylvania and other states have joined paddlers from places like Australia, New Zealand, England, Germany, Japan, Hong Kong, Tahiti and other Polynesian Islands.

The Molokai Hoe continues one of Hawaii’s most important cultural traditions and honors canoe paddlers everywhere. It is a test of physical and mental endurance, determination and teamwork, while battling nature’s extreme elements. It has been claimed that the Ka’iwi Channel is one of the most treacherous spans of ocean in the world and the current record time for the difficult passage is under 5 hours.

Of Polynesian origin, the canoes are about 40 feet long and weigh about 400 lbs. Six paddlers sit evenly spaced the length of the canoe. A steersman sits at the back and controls the canoe’s course with their paddle. The Stroker, sitting in the first position sets the pace. Paddlers 1 through 5 stroke on staggered sides of the canoe and the steersman switches at will. The Caller, usually in seat 2, signals the changes.

As the canoe is very narrow, about 2 feet wide, it is stabilized by an ama, a 10 foot long float which is connected to the canoe by two wooden struts called iako. It is this catamaran design that allows the canoes to venture into the tumultuous waters of the Pacific.

The early race crews consisted of 6 men who paddled the entire distance.   Ironmen.   Today’s crews consist of 9-10 paddlers and each canoe is followed by an escort boat, which carries the paddlers not in the canoe. Crew changes occur every 20-30 minutes in mid-channel with paddlers in the canoe rolling over one side while the rested paddlers are climbing in the canoe from the other side.

Each year in October, over 1,000 crew members compete in one of the longest running annual team sporting events in Hawaii, the Molokai Hoe. It is considered the world championship of off-shore canoe racing and has been running for over 50 years.

Resistance by coaches and officials, who thought the Ka’iwi channel too treacherous for women, kept the ladies on the beach until the mid 1970s. By then the women’s persistence convinced folks that women could paddle the channel.

In 1975, two crews made the first unofficial crossing and the race has flourished since then attracting as many as 80 crews and 700 paddlers each year for the race.

The race starts at Hale O Lono at Molokai’s southeast corner and finishes 41 miles later at the Hilton Hotel on Oahu. The current women’s race record is a little under 5 1/2 hours.