Geologists tell us that, at one time, there was a much gentler slope to the terrain on the north shore of Molokai. Here we call it “The Backside.” 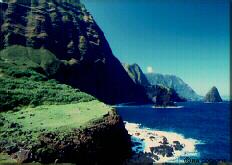 The precipitous cliffs evident today resulted from a landslide of enormous proportions. Evidently the continuously pounding surf on this shore, over a gazillion years, undercut the land until one day, Splash! Huge pieces of the island fell off into the Pacific, leaving behind the world’s highest sea cliffs which have been beautifully sculpted over the millennia by rain, wind and waves.

The left photo shows a small part of the pali looking west toward Kalawao on the Makanalua peninsula. Notice the triangle shaped moku (island) at the right center.

That same moku is at the left center of this next photo looking east from Kalawao on the peninsula. 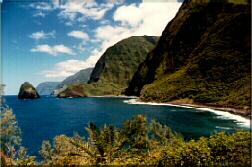 Historians claim that, in ancient times, most of the valleys along the north shore were well populated.

Today, however, only a few accept the challenges and difficulties inherent in making this part of Molokai their year-round home.

Outside supplies can only be brought in by boat, during the summer, when the ocean is calm or on foot over the mountain from the south side of the island. 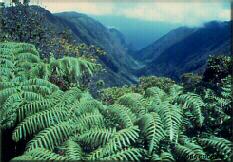 Near the top of the eastern Molokai mountain, is the 2,774 acre (1123ha) Kamakou Preserve.

Here you will find more than 250 species of Hawaiian plants, at least 219 of which can be found nowhere else in the world, plus a variety of extremely rare Hawaiian birds.

From the preserve, the grandeur of the north shore valleys can be appreciated as they stretch toward to the Pacific.

In 1982, Molokai Ranch granted a conservation easement to The Nature Conservancy to restore the area and protect it.

Access to Kamakou Preserve is available through monthly, guided hikes. Advance reservations with The Nature Conservancy office on Moloka’i are required.

While the boardwalks of Atlantic City or Santa Cruz may be wider and more famous, the Kamakou boardwalk is certainly unique. It snakes through the rain forest and offers fortunate hikers a glimpse of Mother Nature’s handiwork that can only be found on Molokai. 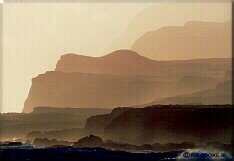 Every trip to the back side offers a new look at this spectacular area. While the pali and mountain are the same, time of day, season, surf and weather conditions combine to create new panoramas.

As if it were a different island, here, sea spray and early morning light create a breathtaking, almost surreal vista.